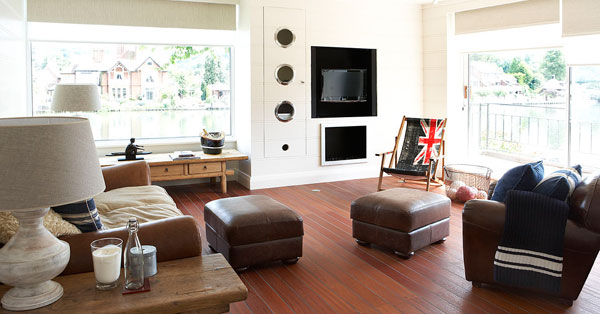 When observing the incredible work that Anne Haimes Interiors has completed on a riverside apartment in Marlow it is hard to believe that the whole project began with a nautical mirror in the window of Anne Haimes’ shop in Henley-on-Thames. The client, a boat enthusiast and keen fisherman, wanted a nautical theme to run through the property and having seen the mirror as he passed by he appointed Anne Haimes and her team to manage the entire project, redesigning the whole property to create the perfect weekend getaway for him and his wife.

The property is a riverside apartment in a building of no architectural merit but in the most amazing setting with exquisite views of the River Thames. “The first time I entered the property for my initial client meeting through a small, nondescript entrance hall into a beige sitting room I was completely unprepared for the spectacular river views that followed; the river extends from beneath the sitting room windows giving the impression of actually being on the water. This was a challenging but rewarding project to work on and the river was a fantastic source of inspiration throughout” commented Anne.

As the brief was ‘nautical’ Anne was keen to open up the property’s interior so as to take advantage of the natural light and river views. The kitchen was tucked away and closed off from the dining area and her first instinct was to remove the wall between the two. This however kicked off a lively debate as reconstructing the kitchen as such would mean that when entertaining, the pots, pans and food preparation would be on view for all to see. The compromise was to only partially remove the wall and incorporate a breakfast bar and seating, allowing this area of the kitchen to have uninterrupted views of the river and benefit from duel aspect lighting.

Another decision was to panel all of the interior walls with 800mm horizontal paneling and the ceilings with 550mm panels. Vertical slots were routed in the walls to accept wooden batons, onto which the paneling was fixed. The ceiling and wall paneling was made so that each length interlocked, and the width was calculated so it fitted between the coving and skirting perfectly. Once in place the joints were caulked and then the panels painted, leaving the joints virtually invisible.

All radiators were removed and replaced by a new under floor central heating system and in all areas except the bathrooms and kitchen a lovely rich toned wood floor from Kahrs was installed. As there was no chimney, an Onyx Plus firebox supplied by Planikawas fitted into the wall with the television recessed above which, when entertaining, can be hidden behind an inset panel. The panel is fitted with cleats which were sourced from Italy through a local boat yard, giving the design authenticity and unique character. Because of the construction of the building recessed lighting was not possible so instead Mino spots from John Cullen and recess fitted floor up-lighters were used.

When designing the kitchen Anne was keen to emulate the galley of a ship in order to maintain the nautical theme. It was designed using oiled Iroko for the worktops and the splash back behind the cooker features a cartoon image of the owner, who loves to cook, etched into glass to add a personal touch. There is also slatted detailing on the cupboard doors to help achieve the galley-like feel and appearance.

Doors leading to the bathrooms and utility were made up with portholes, fitted with etched glass for privacy, which create a cabin-like illusion and ensure that even the small details meet the brief. The main entrance was redesigned and rebuilt to feature etched glazed panels and a wide, solid, painted door fitted with a stunning large ‘Push me Pull you’ handle in polished aluminium. This, together with all door furniture and the portholes, was supplied by Philip Watts.

In the main sitting room electric blinds were fitted, one sheer and one opaque, to each of the large windows giving privacy and screening when needed but not interrupting the beautiful views in the way curtains would do if they were framing the windows. The bathrooms too were designed to continue the nautical theme, with large white tiles, porthole mirrors (where it all began!) and cabinets in a rich walnut.

Anne’s client commented: “My wife and I fell in love with our flat because of the river but were distinctly underwhelmed by the pedestrian interior and boxy rooms. Anne turned the apartment into a cool, uncluttered but highly liveable space. She immediately understood that we did not want a look that was overly sleek but that we also did not want to go the cottage-cutesy route.  She is a great listener and was able to follow and interpret – in practical terms – our ideas, which weren’t always as well-articulated as they could have been. As we live in London and also travel a great deal, we were unable to come down to Marlow to check as often as we would have liked while renovations were underway. But Anne is such a hands-on contractor; we were comfortable knowing she was always on-site to make sure things were progressing as they should. Annie is everything a designer should be. ”

Anne Haimes has been working as an interior designer for over twenty years both in the UK and abroad. She Interiors is now renowned for successfully combining a thriving interior design business with a busy retail shop and has established a reputation for creating timeless, elegant interiors whether contemporary, traditional or modern classic. Building happy, harmonious relationships with clients is key and Anne Haimes and her team work tirelessly taking any project from conception to completion ensuring both aspirations and budget are met. Anne understands that approaching the decoration or re-decoration of your home can be daunting and she believes that design should be a fun and rewarding experience that is accessible to everyone. 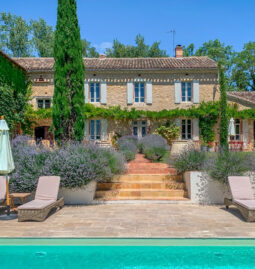 Read More
The Leggett Prestige team are fielding many calls from UK buyers who are still keen on retiring to France but want to know what has changed since Brexit.

Read More
HOME BUYERS in Peterborough have the perfect chance to move into a new home tailored exactly to their tastes this Easter thanks to a new offer from leading housebuilder Barratt Homes. The developer’s ‘Design off the Shelf’ promotion …